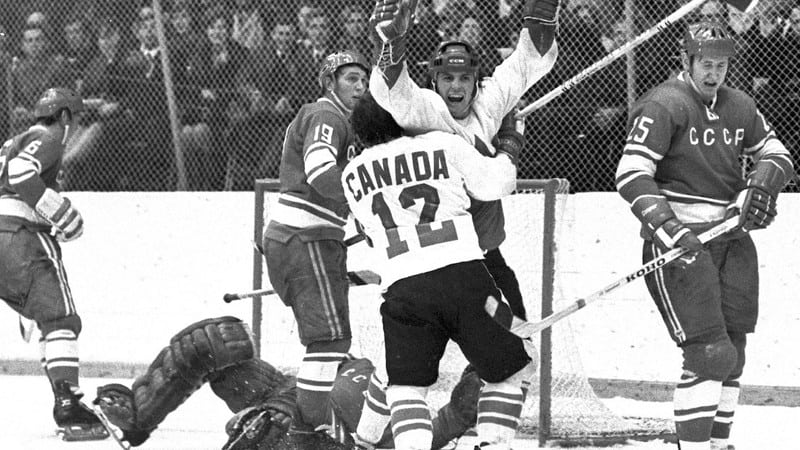 Liam Maguire is a noted hockey historian, a published author, radio host, and TV personality. He is regarded as the foremost historian on the NHL and Canadian hockey in general. When asked recently which moment he considers to be the most impactful in the history of the sport, Liam has been unequivocal in his response: the 1972 Summit Series between Canada and the Soviet Union.

“I was born in 1959,” Liam says, reliving his rise to becoming Canada’s preeminent hockey historian. “I grew up as a young boy in the 60s. I played hockey, everybody did. We were hockey fanatics. We bought the hockey cards, and in those days the anecdotes on the back of the cards were neat. There was a lot of really neat little significant type of factoids. I started just memorizing them.”

Liam was blessed with a great memory, and this rite of passage for young Canadian boys in the 60s and 70s soon became something he was able to harness and turn into a career. His ability to remember statistics and player names helped the love of hockey factoids grow into something more significant.

“I attended an exhibition game in Ottawa,” Liam says. “In 1974, I went to a game with five High School friends to see the Montreal Canadiens play the Chicago Blackhawks. To see who was going to be in the line-up you had to buy a program. I went home that night and I couldn’t sleep, I was so excited. I read the program cover-to-cover.”

Liam spent the night studying the Canadiens’ roster, learning about players he had previously never heard of, realizing how little he knew about the team. The next day he held a contest with the friends he had been at the game with to see who could remember the most trivia from the previous night.

“For whatever reason, I did. When I think of it now, it was so innocuous, but I got this instantaneous reputation as a hockey expert, and I knew nothing. So I said, I’d better bone up. I’d better start knowing these things if I call myself a Habs fan. So then I started studying up on the Montreal Canadiens.”

The real turning point came a year later when the visiting cousin of a boy at Liam’s school, who had heard of his newly-formed reputation as an expert, asked him who had won the Stanley Cup in 1933. Liam didn’t know, although he did correctly answer that it was an American team.

Liam is often asked what he considers to be the most impactful moment in the history of hockey. There’s no doubt in his mind that nothing even comes close to the Summit Series of 1972 between Canada and the Soviet Union. The event has been commemorated on the country’s coins and is considered a defining moment in Canadian history.

“We have to be respective of history, regardless of what the topic is. In this case, it’s a sport, and we don’t hold in in the same regard as we would a wartime effort, and nor should we. From a sporting perspective, especially hockey, and especially in terms of professional hockey at the highest level, nothing was more impactful than the Summit Series in 1972.”

Despite the fact that these were only exhibition matches, it was the first time in history that Canadian players had been pitted against the world’s best, having withdrawn from international competitions after a dispute with the IIHF some years earlier. Team Canada were coming to play seriously.

The majority of Canada’s top players from the NHL were available to compete, with the intention being to create a true best of the best hockey event. At the time, the Soviets had been the dominant team in international competition, and the prospect of them taking on NHL professionals was mouthwatering. These would be, without doubt, meaningful matches.

“The entire Soviet Union shut down to watch the games in Russia,” Liam explains. “The entire hockey world, such as it was available to them at that time in 1972, were watching and waiting for the results of the Summit Series, to hear how the Canadian pros were doing against these Soviet ‘amateurs’.”

The result of the series are now well known in Canadian history, and represent a huge feat of strength from the Canadian team. After losing games one and four, and tying once on home soil, Team Canada lost the first game in the Soviet Union. Against all the odds, Canada roared back to win the remaining three games and take the series.

One of the knock on effects of the series was the influx of European players joining the WHA and the NHL soon after, players scouted during those games, especially from Sweden, most notably Börje Salming, Hans Inge Hammarström, Lars-Erik Sjöberg and Thommie Bergman. It opened up the NHL to a new global audience.

As Liam passionately describes it, the most striking moment in the series came in the third period of game eight. Team Canada were down 5-3, needing a big finish to come through and win the series. After pulling the game back to 5-4, Canada scored the tying goal through Yvan Cournoyer. At first, the goal light did not go on.

“You know why it didn’t go on?” Liam asks. “Because the goal judges were paid by the Soviets. They didn’t want Canada to win. Alan Eagleson stood up to complain, and as he was racing over to try and confront the goal judge, he was intercepted by the Soviet military, who circled the arena. They were carrying machine guns. They were trying to cart off Alan Eagleson, the executive director of Team Canada.”

The response from Team Canada was to clear the bench and cross the ice. Players Gary Bergman and Peter Mahovlich climbed over the boards, swinging their sticks at the Soviet military, trying to stop Eagleson being dragged out of the arena. It’s all on tape, and it’s quite something to watch.

“They rescued Alan Eagleson. They bring him back across the ice, and then with three minutes to go, in a 5-5 game, in game eight, the Russians send down a message to the Canadian bench that they’re going to declare victory, because they had scored one more goal than us.”

The defining moment of the series was about to play out. Alternate captain, Phil Esposito, huddled his team together to give a rousing speech, refusing to leave the ice until Team Canada had won. Paul Henderson jumped off the bench and found himself with one last shot to win the game.

“The puck is there. He takes a shot, and Tretiak saves it, and the puck comes right back on Paul’s stick, then he buries it, with 34 seconds to go. At 2.30pm Eastern Standard Time, Thursday September 28th 1972. And the country went wild. Nothing ever in the history of mankind will rival the Summit Series in 1972 for impact, drama, and how it ended.”

As Canada’s preeminent hockey historian, Liam Maguire is unequivocal about the importance and impact of the Summit Series. It’s hard to imagine anything like it ever happening again, being a product of its era and a truly defining moment in Canada’s history.