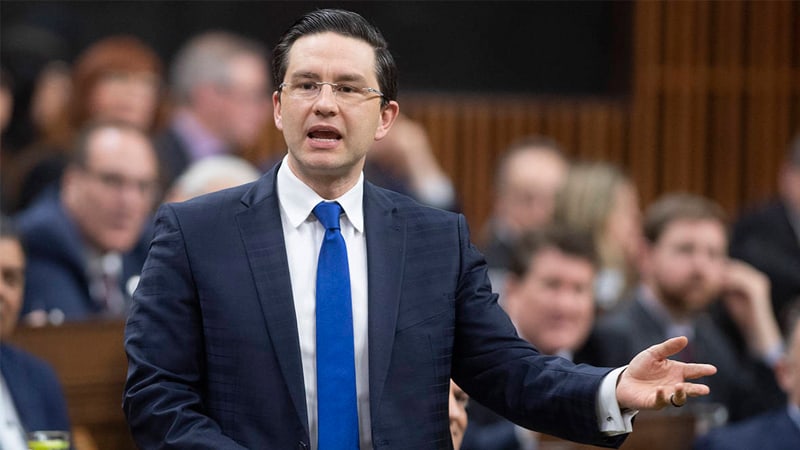 In September 2021, Canadians will go to the polls in a federal election to determine whether or not Prime Minister Justin Trudeau will be granted a third term. Trudeau’s record since he’s come to power is continuously under question, with a number of scandals threatening to derail positive work he has done in passing a number of progressive bills, and the general sense that this is a government with a poor overall record. Mr Poilievre served as Minister for Democratic Reform from 2013 to 2015 and Minister of Employment and Social Development in 2015, and currently represents the suburban Ottawa riding of Carleton and serves as the Opposition critic for jobs and industry. He spoke with us recently to take us through the record of the Trudeau government.

“Trudeau is not that popular,” Mr Poilievre says. “In the last election he only got 33% of the vote. He’s very popular with the media, but he’s not popular with the general public. His approval ratings have been consistently very low.”

The distribution of votes won the election in 2019, according to Mr Poilievre, which gave Mr Trudeau a lot of seats with very few votes. One of the most insistent charges the Prime Minister has faced during his time in office are his attacks on free speech.

“Trudeau’s most direct attack on free speech was a bill called C-10, which would give the Canadian telecommunications regulator the control of what you see and say online. Basically, the pretext for the bill was that it would protect Canadian content.”

The C-10 bill was designed as an update to the Broadcasting Act, Canada’s existing legislation aimed at promoting and developing Canadian producers and creators, and requires broadcasters to support cultural industries financially. Mr Poilievre believes this is censorship, and he was a part of the backlash that eventually prevented the bill from passing.

“Trudeau saw it as an opportunity to begin regulating what people get to see online, in order to ensure that they get more left-wing, liberal propaganda that is approved by the state and therefore promoted in our regulatory scheme that gets to manipulate the algorithms. So, we fought back, and that is one of the big issues that’s at stake in this election.”

Another important bill to look at is C-36, which amends the Criminal Code to create a recognizance to keep the peace relating to hate propaganda and hate crime. Mr Poilievre considers this a further arm of the governments ‘attack’ on free speech.

“Trudeau is regularly warning that criticism of him will result in great danger to all of society, and therefore he should have exceptional powers to control what individuals say and see online. Of course that’s antithetical to a free and democratic society.”

To the rest of the world, there doesn’t appear to be too much to dislike about Justin Trudeau and his government, but Canadians know all too well the string of political scandals that have followed him since his first election to office in November 2015. The most prominent was the SNC-Lavalin affair in 2019, when a newspaper article accused the organization of bribing the Gaddafi family in order to defraud the Libyan people of $100m.

“You’d think that a woke, anti-colonial, modern progressive would be outraged by a western company stealing from poor African people. Trudeau pressured his indigenous Attorney General to have the charges dropped, and a special agreement signed that would allow the company to avoid even pleading guilty.”

Attorney General Jody Wilson-Raybould refused to do what was asked of her, believing that a legal process should commence to determine the company’s guilt or innocence. The result of this refusal was that Wilson-Raybould was relieved of her duties.

“He claimed it was all about protecting jobs – but they were convicted, and nobody lost their job. It wasn’t about protecting workers, it was about protecting a liberal-linked multinational corporation from accountability. It stands as a glowing example of his personal hypocrisy and utter moral failing.”

Mr Trudeau was the first sitting Prime Minister ever caught breaking conflict of interest rules, of which he was found guilty twice, the second time after accepting $250k worth of vacation gifts from someone with whom he had government interest. In most countries, Mr Poilievre says, this would have been enough for a criminal prosecution.

Then came the scandal surrounding the WE charity, an international charity and educational partner that claims to transform lives through sustainable impact. The scandal refers to members of Mr Trudeau’s family receiving speaking fees from the charity soon after he became Liberal leader.

“There’s not a lot of scrutiny about what they actually do, what good they produce with the millions of dollars they raise. This scrutiny led to Justin Trudeau’s family because they had paid his mother and his brother and his wife a total of half a million dollars for speaking fees and travelling expenses. Trudeau then approved a half billion grant to the organization.”

Trudeau’s involvement was eventually uncovered and the program was cancelled, with the Prime Minister insisting he did nothing wrong and his Finance Minister resigning as a result of the decision to award this money. For Mr Poilievre, it is just another example of a culture of corruption surrounding Mr Trudeau and his government.

In one sense the failures of the Trudeau government have been laid bare in the contention between western and eastern Canada, particularly in the Prairie Provinces of Alberta, Saskatchewan, and Manitoba, who have been left so disenchanted by their own country that separatist movements such as “Wexit”, the Alberta separation movement have seen significant support over the last few years.

“It’s been the outright hypocrisy and frontal assault of the Trudeau government on Alberta’s way of life and its resource-based economy. Trudeau has welcomed hundreds of millions of barrels of foreign oil into Canada off the east coast of the Atlantic.”

At the same time, two major pipelines that would have helped western Canada get oil to market have been killed, leaving the province with a terrible discount on its oil. Western Canadian Select is a blend of petroleum that is $15-20 cheaper than the world price because it is unable to be taken to the world market.

“99% of all Canadian oil exports go to the US, because of Trudeau’s effective blockade on the oil sands. That has led unemployment to 8%, it is blowing a multi-billion dollar hole in government revenues and in the local economy. So naturally, Albertans are wondering what future they have if their own national government is going to deliberately attack their economy while favoring foreign oil imports.”

This has led to many people joining calls for Alberta to separate from the rest of the nation, calls which Mr Poilievre considers unjustified, despite the extremely unfair circumstances for people living in the province.

“The solution to this is quite clear,” for Mr Poilievre. “It’s to stop importuning foreign oil and use our own, and encourage the continued improvement in environmental standards in the western Canadian oil sector so that the resource can be harvested responsibly even as we move towards a lower-carbon global economy.”

There have been questions asked by Albertans as to the ethics behind these decisions, with much of the imported oil coming from Middle Eastern countries where dictatorships prosper and human rights records are questionable if we’re being kind.

“It’s not surprising that [Trudeau] would favor foreign petro-dictatorships over Canadian oil and gas production. He has shown a great affection for dictatorships around the world; he praised Fidel Castro as a great revolutionary; when asked what was his favorite government he said that the Communist dictatorship in China was the model he most preferred.”

China’s role in the COVID-19 pandemic has come under increasing scrutiny since the initial outbreak in Wuhan in late 2019, with a number of conspiracy theories growing around the origins of the virus.

It comes at a time when Canada’s relationship with China is already strained, leading back to the detention of two Canadian citizens on spying charges in 2018. The government’s handling of China’s treatment of the detainees is becoming an increasingly contentious issue going into September’s election.

“They’ve got two of our citizens hostage, so we shouldn’t be doing business with them until they release our people. Rather than taking a strong stand, Trudeau believed all of Beijing’s lies about the early pandemic and actually attempted to sign a deal allowing for Canadians to buy the CanSino vaccine (manufactured by China)”

This proposed deal created a delay in Canada receiving vaccines from other sources, setting the nation’s vaccination efforts back 100 days. As far as Mr Poilievre is concerned, this and other questionable arrangements points to Trudeau’s ongoing attempts to pander to Chinese interests, which he believes is putting Canada in great risk long-term.

“We need a full, forensic investigation into the origins of the virus,” Mr Poilievre says. “We know China lied about the very existence and severity of the virus at the outset, which denied the world valuable response time we could have used to contain its early spread.”

Prime Minister Trudeau called an early election, with obvious expectations that he would win. With these issues stacking up against him, however, he may have his work cut out persuading Canadians to give him a third term.

“He thought he would just grab a majority, because people are still afraid of covid, and he thinks that having given away lots of money, people are going to be wonderfully grateful for his benevolence. I think it’s backfiring; he’s plummeted about 10 points in the polls since he called the election. He could be in some real trouble.”