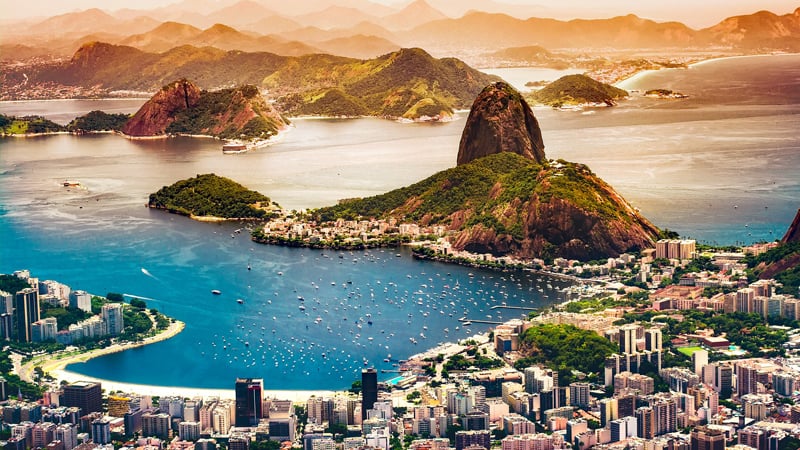 Canadian businesses are preparing to enter a post-pandemic world where environmental sustainability is of the utmost importance to consumers, paired with an increased desire to experience high-quality food and beverage products, whether that be at home or at a restaurant. Brazil has established processes that prioritize the protection of their native environments, economy and populations. Through inventive and tested policies and practices that lead to responsibly sourced products, Brazil has become an important exporter in the global market. In addition to offering products backed by environmentally sustainable and socially responsible cultivation methods, the fifth largest nation in the world also presents itself as a steadfast food importer as its vast and varied market for gourmet goods is hungrier than ever.

Cacao and peanuts as examples of sustainable production

One of the products cultivated in the South American country that acts as an archetypal symbol of sustainability in agricultural production is cacao. “Not only does Brazil produce some of the planet’s highest quality cacao bean and chocolate – it also protects nature by doing so,” explains Andrea Mansano, Market Intelligence Coordinator at the Chamber of Commerce Brazil-Canada (CCBC), a non-profit organization that has been facilitating trade between the two countries for nearly 50 years. “There are different types of cacaos in Brazil, the seventh largest global producer in volume, presenting a great variety of flavours and characteristics. One of the most sustainable and unique ways to produce cacao in Brazil is the Cabruca system, a method that is as innovative as it is inveterate.”

The Cabruca system is based on shade planting under the canopy of forest trees. This technique provides ideal conditions for cacao and promotes biodiversity (it’s the agricultural system with the richest native biodiversity in the world). The system which has been used in the Brazilian state of Bahia for 200 years is characterized by the fact that cacao cohabitates in the shade, thriving on 30% sunlight and 70% shade, with other native species. Producers must plant native trees which has led to 400,000 hectares of cattle pastures in the state of Pará having given way to cacao plantation and native forests, and 565,000 hectares of cacao in Bahia with approximately 70% being produced in accordance with the Cabruca system.

Chocolate made with Brazilian single origin cacao therefore brings with it two crucial characteristics for responsible food production. The first is environmental sustainability, since the Cabruca system is unparalleled when it comes to the preservation of natural resources, as it protects the Atlantic Rainforest. The second characteristic is social responsibility, as, besides having strict laws against child labor and forced labor, Brazilian cacao production system promotes the development in small local vulnerable communities.

The country’s cacao is grown in various biomes, and each produces fruits with unique characteristics, just like grapes produced in different terroirs yields unique notes in wine. Chocolate made with Brazilian cacao is globally revered for its refined taste and unprecedented quality, with cacao produced in Pará featuring more butter (58% where cacao produced in other tropical countries typically contains 52%) and has fat with a higher melting point than other cacaos. Public policies also incentivize cacao cultivation in this Amazonian region that yields such a high-quality product. This, teamed with the fact that Brazil is one of the few self-sufficient countries when it comes to producing ingredients for manufacturing chocolates and candies, has contributed to its global reputation for producing some of the best cacaos in the world, used in chocolates of the highest quality at the hands of not only Brazilian chocolatiers but also those around the world.

Peanuts are another local product that represent sustainable and responsible production and desirable high quality. Around 90% of peanut cultivation and processing in Brazil takes place in the Mogiana and Paulista regions, in a system that rotates with sugarcane: every five to six years, 10-15% of the crop is reformed and replanted to recover land productivity, incorporate nutrients such as nitrogen into the soil and interrupt cycles of pests and weeds. The Agronomic Institute of Campinas developed four peanut varieties with high oleic content between 2011 and 2015, extending the shelf life of these Brazilian peanuts and making them highly competitive on the global stage.

Brazil and Canada share a long history of close economic relations, both ranking the other among their respective top 10 major investors. With a GDP of $1.445 trillion and with a population of nearly 215 million people, Brazil is one of the largest consumer markets in the world. In fact, the country’s trade relations with Canada have been consistent despite the effect the pandemic has had on global trade – to illustrate this, Brazilian imports from Canada of edible vegetables and certain roots increased by 50% in the fourth quarter of 2020 when compared to the same period in 2019.

Canadian companies can turn to the largest country in South America as a destination for their high-quality, gourmet food and beverage products. Over 20 million Brazilians,  which represents 10% of the country’s population (over half of Canada’s population) – is hungrier than ever for imported gourmet goods. While increased unemployment during the pandemic resulted in a decrease in expenditure on gourmet food items in many markets, this wasn’t the case in Brazil. Consistent demand for premium products can be found in the aforementioned wide and varied group of financially resilient consumers who are willing to pay more for high-end goods as they seek innovative flavours, single origin products and unique experiences.

This progressively sophisticated consumer culture creates an unwavering demand for upmarket Canadian food and beverage products that appeal to an appetite for elaborate culinary styles. This market, known in Brazil as the “High Gastronomy” market, includes cheeses from boutique dairies and imported wines. To illustrate this enduring interest, Brazil’s cheese market represented US$ 5.2 billion in retail value in 2020 and is projected to expand to US$ 7.4 billion in 2025. Similar projected growth can be seen in the country’s demand for wines as in 2020 the market size had a volume of 289.8 million litres and is expected to hit 390.8 million litres in 2024.

The hospitality industry in Brazil is also enjoying exciting growth with a rise in popularity in Japanese and other Asian cuisines (especially in São Paulo where there are more than 3,000 restaurants in this category). This expansion has generated an increased demand for imported Canadian seafood including saltwater fish, snow crabs, lobster and scallops, the latter of which has become a frequent feature on the menus of some of the country’s finest restaurants. In fact, Clearwater Seafoods, a Canadian company, has found success in exporting their products to Brazil by making them available to foodservice providers daily and providing support in incorporating the ingredient in restaurant menus.

There exists in Brazil a largely untapped market for other Canadian specialty items including jams, maple syrup, duck meat and foie gras. By connecting Canadian and Brazilian companies, helping them evaluate market trends and navigate bureaucratic procedures, the CCBC is uniquely equipped to help bring sustainable products to Canada and supplying Brazil with unique Canadian food and beverage gourmet products.