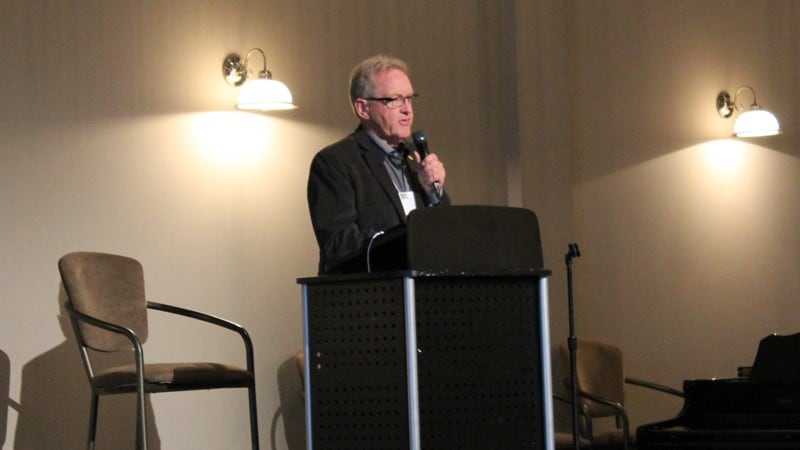 A federally registered non-denominational public foundation, the Canadian National Christian Foundation has been helping Canadian Christians maximize their giving since 2002, sending over $70million to thousands of charities working around the globe.

The foundation’s President, Lorne Jackson, is a published author and public speaker on the subject of estate planning, and donates his time to helping Canadians think through their end of life decisions. The Canadian National Christian Foundation (CNCF) serves over 170 donors from across Canada and has invested significantly in Canadian-based charities. Mr Jackson explains the reasons behind starting the foundation, the significant tax benefits available for charitable donors, and the spirit of giving that always remains close to his heart.

After many years in the financial services business, Mr Jackson left the ‘for profit’ sector in the early 2000s to create the Canadian National Christian Foundation, a federally registered non-denominational public foundation.

On a year’s hiatus from work, Mr Jackson took this time out to decide what his next step would be. He admits that he is not the kind of person to retire early and spend his time playing golf – he felt there were bigger things destined for him.

“As a Jesus follower, I happen to believe that God owns it all, including my time. I call myself not retired, but I’m rewired to do something different, and I guess the [Canadian National Christian] Foundation started because I was [asking] how can I give back?”

In exchange for the sale of his company, Mr Jackson received both cash and public stock. Feeling that the amount received was more than enough for he and his wife to live comfortably on, he decided the remainder should be put towards something more meaningful.

“We received way more than enough, and I knew that money then was not mine, that’s money that I needed to give away. So I used that in setting up the Canadian National Christian Foundation, because you can give public stock and you don’t ever have to pay the tax on the public appreciation of that stock, as that growth goes directly to the charity.”

When he set up the CNCF in 2002, Mr Jackson assumed it would amount to little more than a small foundation collecting donations, but over the years the foundation has grown and changed significantly, offering many new dimensions.

“We started doing estate planning for donors in 2010 – we have over forty Canadian charities that we work with – and then more recently started teaching biblical finance to people in church circles; in other words, what does God’s word say about money. If you look at the investment strategies of the world today – examples like diversification and giving over time – all that comes from the bible.”

Today the foundation has over half a billion dollars coming in from its many estate plans. What began as a small foundation accepting donations has become a way of helping people manage end of life decisions and leave their money to family.

“Many public foundations allow you to give, but they want to tie up the principle, and they say you can give up to 5% a year to your favorite charity – we say you can give whatever you want. A donor can gift CNCF a bunch of public stock, we turn it into cash, and then they can give it all out right away, if they wanted. It gives them a lot more flexibility.”

A key difference between CNCF and other public foundations, according to Mr Jackson, is that it has no desire to hold onto donor’s money. The foundation’s board is very active in doing charitable work and getting the money into circulation.

“We’re also, I would say, a more efficient way of giving than even a private foundation. Lots of times, high capacity donors may want to set up their own private foundation – there’s a bit of an oxymoron with that, because if you have a private foundation, people can see what you’re giving to, who you are so your giving is very public. All they’ve got to do is go on the CRA website and your information is all there”.

Part of the problem with a Private Foundation is if you like helping the poor then anyone who raises money for the poor can easily see that on the CRA website and make approaches to you for funds.

“If they’re using CNCF as a public foundation,” Mr Jackson explains, “they can’t see who gave to whom. All they can see is how much money and to whom CNCF gave it to, so it’s much more private.”

Benefitting both donor and charity

The CNCF works with over 170 donors across Canada. Most of these donors will either be business owners or will have just sold a business or a piece of real estate. This means that there are tax issues that affect any potential donations.

“I remember someone who came to me, who had sold his business in Alberta, and he was concerned because he had this huge tax issue, and he called me up and he said ‘I need to give away $2m before the end of year for tax purposes. If I gave you a house I own, and if I gave you $1m worth of stock, could you turn those into cash and give me a receipt for it?’”

Mr Jackson remembers this proposal coming in October, leaving little time for the house to be sold before the end of the year. The foundation took care of the issue, getting an appraisal on the house, which was sold for its $1.1m valuation later the following year.

“The neat thing for this guy was that he was able to receive his charitable receipt before the end of  year, so he could use it in his taxes, but he didn’t give the money out to the charities he wanted to support until years later. So, much more flexibility.”

The concept of businesses writing off income for tax purposes is often misunderstood. Mr Jackson explains that the practice of gifting public stock rather than selling it first and gifting after tax residue is a win-win for both donors and charities.

“By gifting stock, the donor doesn’t have to claim the [capital gains], and because charity doesn’t pay tax, they now have an increase the full amount of the gift, but they don’t have to pay tax. So it benefits the donor in a number of ways – they’re able to give more than they could normally give, and now they’ve got a tax receipt that’s worth considerably more than they actually paid for the stock in the first place.”

“The charitable work that we do with helping people with their estates won’t necessarily flow through the foundation. We’re there to help the donor make the right decisions for themselves and their family.”

In these cases, there are still many donors who give to charity, which is usually a good thing for their estates. This money is generally given directly to the charity rather than first going through the foundation.

“We work with over 40 charities like Compassion Canada,” Mr Jackson explains, “we also work with Billy Graham, the Samaritan’s Purse organization, Trinity Western University, and Tyndale University, just to name a few.”

The main aim in estate planning is to help donors make the best decisions from a tax perspective for their families future, but at the same time there is the knowledge that one day there will be over half a billion dollars flowing through CNCF to Canadian charities from these estates.

Sowing the seeds of charity

“The cause that gets my heart the most is helping the poor,” Mr Jackson says, “I did a study one time in the bible of all the verses that say how God blesses those who help the poor, and I very quickly decided I’d like to help the poor.”

“They can loan [donations] out to somebody in a third world country, where people buy for example,a sewing machine or a cornmeal grinder, and they are able to sell what they produce with that, and now have a reasonable lifestyle. It’s just amazing what it does for people.”

As a charity leader, Mr Jackson notices that only a very small group of people or organizations give generously. He puts this down to people thinking of their money in terms of a pot that would be diminished by the act of sharing.

“The bible says money is like seed. In fact, the apostle Paul in the New Testament said that the farmer who plants only a few seeds would get a small crop, but one who plants generously would get a generous crop. He’s talking about money. If you want a lot, you need to sow a lot, and that means giving it to help others.”