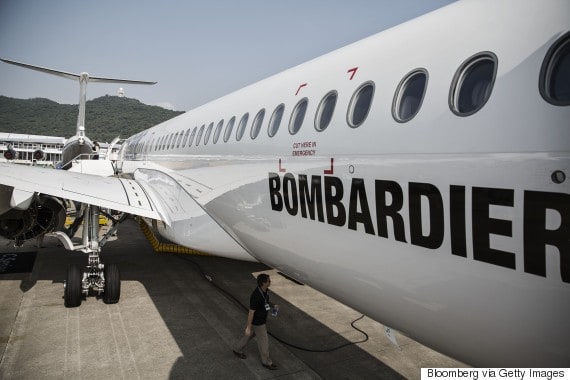 “We are proud to see the C Series aircraft in SWISS livery landing at London City Airport for the first time. This new milestone continues the momentum propelling the C Series aircraft program,” said Fred Cromer, President, Bombardier Commercial Aircraft. “The CS100 aircraft has the perfect combination of steep approach and short field capability as well as longer range. These attributes provide airlines with the opportunity to reach new markets from London City Airport and other challenging airports around the globe, generating an increased level of interest in the C Series program.”

“One of the key aspects of the C Series aircraft, is the fact that it is designed for operations at challenging city-centre airports. Thanks to leading-edge innovation, the C Series is by far the most community and environmentally-friendly aircraft with a very low-noise and low-emission footprint. It also happens to be a more economical and passenger-friendly option than other aircraft in its class,” said Rob Dewar, Vice President, C Series Aircraft Program, Bombardier Commercial Aircraft.

“As part of our fleet modernization plan, we are gradually replacing the Avro aircraft with the C Series and today, we start with our CS100 flight operations from Zurich to London City as the world’s first airline. We are excited to offer our guests the benefits of the C Series such as more comfort on this important route,” said Peter Koch, C Series Fleet Chief, SWISS.

As of now, SWISS will operate regularly to London City Airport from its main hub in Zurich with a CS100 and from Geneva as of summer 2018.

“The inaugural commercial flight of the Bombardier C Series by SWISS is a landmark moment for London City Airport, and the culmination of five years preparation to bring this next generation aircraft into operation,” said Richard Hill, Chief Commercial Officer at London City Airport. “The introduction of the C Series is an important part of London City’s growth plans and a boon for the UK aviation industry, with its wings manufactured at Bombardier’s Belfast factory. As one of the quietest and most fuel efficient commercial jets in its class, and thanks to its longer range, we can also unlock opportunities for new routes, including the possibility of non-stop services to the east coast of USA, Russia, the Gulf and Middle East.”

The C Series is now the largest passenger aircraft certified to operate from the London City Airport with the longest range. A single-class CS100 aircraft can also fly 2,200 nm (4,074 km) from London City. The CS100 jetliner is the only commercial aircraft that can fly London City-New York non-stop, in an all-business class configuration.

The C Series aircraft is manufactured by the C Series Aircraft Limited Partnership, an affiliate of the Bombardier Commercial Aircraft segment of Bombardier Inc.

Bombardier is the world’s leading manufacturer of both planes and trains. Looking far ahead while delivering today, Bombardier is evolving mobility worldwide by answering the call for more efficient, sustainable and enjoyable transportation everywhere. Our vehicles, services and, most of all, our employees are what make us a global leader in transportation.

Bombardier is headquartered in Montréal, Canada. Our shares are traded on the Toronto Stock Exchange (BBD) and we are listed on the Dow Jones Sustainability North America Index. In the fiscal year ended December 31, 2016, we posted revenues of $16.3 billion. News and information are available at bombardier.com or follow us on Twitter @Bombardier.