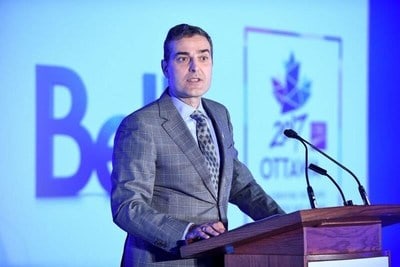 Bell congratulates Mirko Bibic, Chief Legal and Regulatory Officer and Executive Vice President of Corporate Development for BCE Inc. and Bell Canada on being named Canadian General Counsel of the Year for 2017. “On behalf of the entire Bell team, I offer Mirko our warmest congratulations for this well deserved recognition of his leadership and vast range of accomplishments as our chief legal officer,” said George Cope, President and CEO of BCE and Bell Canada. “Mirko’s outstanding strategic vision, work ethic and team building abilities are invaluable assets for our company and essential to Bell’s transformation into Canada’s broadband leader. We are very proud that his peers have honoured him as the best in the country.”

Mirko joined Bell in 2004 as Senior VP, Regulatory and added Government Affairs to his responsibilities in 2008. He was promoted to Executive Vice President and Chief Legal & Regulatory Officer in March 2012.

Having played a key role in every major acquisition and investment made as part of Bell’s broadband leadership strategy since 2008, Mirko assumed additional responsibilities as Executive Vice President, Corporate Development in June 2015.

The Canadian General Counsel Awards, presented by the National Post and ZSA Legal Recruitment, were announced June 15 in Toronto. Now in their 13th year, the national program is dedicated to recognizing excellence among In-House Counsel. Nominees are judged on the basis of excellence, ability to deal with complex issues across different jurisdictions, and contributions to their company’s overall success.