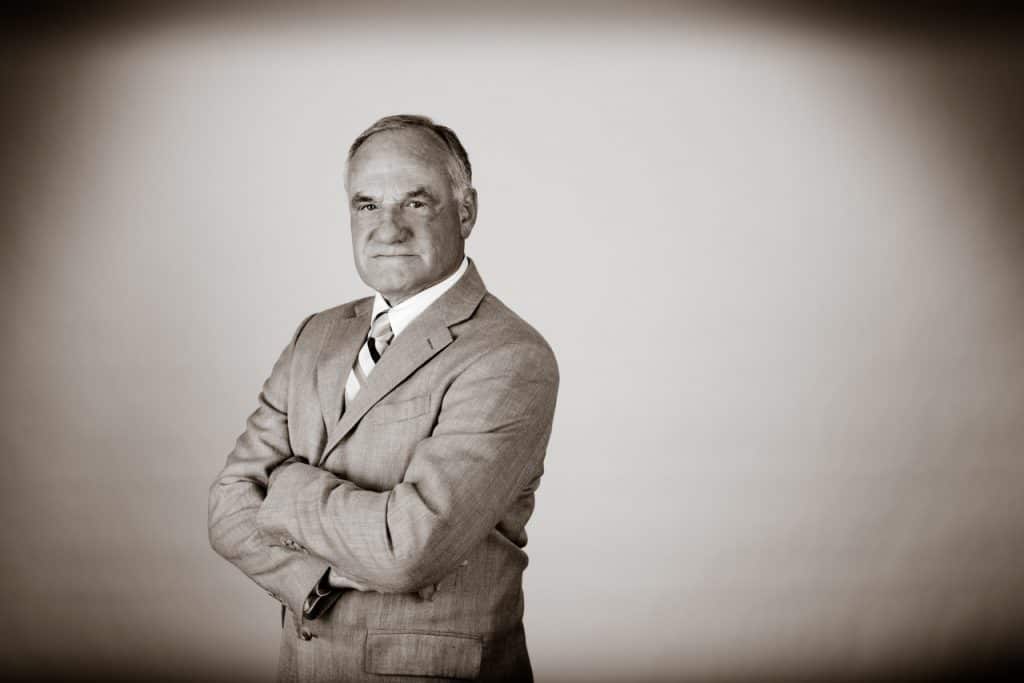 Barry Goldwater Jr. is a former United States House of Representatives member serving from 1969 until 1983. He now employs a lifetime of experience in government and business as CEO & Chairman of Nelson Taplin Goldwater consultancy, assisting businesses to navigate local and federal legislative issues.

Mr. Goldwater gave his thoughts on the relationship between business and government, renewable energy for conservatives, and his evaluation of Donald Trump’s presidential campaign and first year of presidency.

“It’s important that in their dealings and activities as businesses they need to focus some of their attention on government and get to know and develop relationships. Especially with those areas of government which impact their business.” Mr. Goldwater said.

A lifetime of relationship building has given Mr. Goldwater an edge when dealing with local and federal government. “I belong to a number of different associations which allow me access to various subject matter or agencies.” Mr. Goldwater said, “For instance, I belong to the association of governors, I attend their quarterly meetings around the United States, and have the opportunity to get one on one with many different governors, so over the years I’ve gotten to know quite a few of them, and as a consequence it’s easier to do business in those states.”

“I do a lot of business in almost all fifty states, and make it a point to know the legislators, to know who the speaker of the house is, who the president of the senate is, the governor, the attorney general, I make it a point to develop those relationships.”

Mr. Goldwater’s relationships serve to speed up dealings with government, which he says, “has no real incentive to be efficient.” He notes that government doesn’t have a sensitivity or business bottom line which requires it to operate quickly.

Mr. Goldwater includes political donation as an avenue for many businesses to get their foot in the door, “I recall when I was a congressman nobody was going to buy me, but if somebody took enough interest to contribute to my campaign, the least I could do for them was give them the time to come in and talk.”

“I think conservatives have got to get up to speed with what’s going on with technology, and realize that we need to support renewable energy. Not only because it is economic, but also because it’s clean.” Mr. Goldwater said.

“I’m a conservative, but I like clean. I think mankind has dirtied up this globe too much. It’s time that the business community, the conservatives and those who are skeptical about renewables need to understand that this is good, not bad. The future is here, and we better get on board or we’re going to miss the train.”

Mr. Goldwater’s support for renewable energy originated during his time in congress. “Back in 1974 the United States experienced an oil embargo from Saudi Arabia, president Jimmy Carter at the time stood up and declared war on energy independence.” Mr. Goldwater said, “The congress where I served at the time created renewable energy programs and subsidized it heavily with price guarantees, guaranteed purchases, tax treatment, depreciation treatment. We did everything that we could to accelerate past what would be normal market growth.”

“Today, because of those subsidies, renewable energy is competitive with gas, coal, and nuclear.” Mr. Goldwater said. He points out that the subsidies which he oversaw have also gone away as the technology brought the cost of the devices down.

“Today, for instance, you can build a 100mw solar electric generator out in the deserts, and sell that electricity for 3 cents a kilowatt, which is very competitive to gas, which would sell for 3-4 cents a kilowatt. We invested heavily in renewables, that investment is now paying off.”

Mr. Goldwater sees government subsidization is a positive means to grow technologies and national interests beyond regular market growth. Saying, “If our government determined that it is in the national interest to invest in a certain kind of technology, whether it is to cure cancer, diabetes, or provide energy or even weapons of defence, those are investments that I think are reasonable and acceptable.”

“If we find that it’s an important need, I don’t have a problem with government subsidizing that technology. Then, when it comes to applied research, get the government out of it. Let the private market take over that technology and put it to work.”

“I don’t want to see government in the applied area. The conservative policy is that we don’t want government doing for people what they can do for themselves.” Mr. Goldwater said.

Drawing on his years of political and business experience, Mr. Goldwater gave insight into Donald Trump’s candidacy and the first year of his presidency.

“Candidate Trump came along and recognized that Americans were mad.” Mr. Goldwater said, “They were mad and angry over the loss of jobs, stagnant wages, loss of productivity, student loans going through the roof, graduates living at home, government regulations that prevented risk-takers to start small businesses, banks whose loans you can’t qualify for, the affordable care act which was unaffordable. Candidate Trump recognized this feeling within the country, and as a result said he would do something about it, and he was elected.”

“He was a populist, and it was a populist reaction to the phenomena which existed in the United States. Here we are a year later, and what’s the scorecard? If you scrape away all of the dialogue and commentary and look at what he’s been able to do, he gets a pretty high mark, the economy is booming, we’re starting to see higher wages, the stock market is going through the roof, he’s been able to get rid of a lot of regulations which stagnate businesses, he has surrounded himself with pretty smart people.”

“You might look at his popularity and think maybe he is suffering. But once you get away from the Liberals and out in the country, those folks like what Trump is saying and doing. He talks their language.”

Detailing the conflicts between American conservatives and liberals, Mr. Goldwater said the dynamic is not only historically consistent but integral to the freedom of the United States, “In every free nation you are going to be challenged by those who want more government and those who want less. It takes you back to the beginning where we had our founding fathers Hamilton and Jefferson. Hamilton advocated more and Jefferson wanted less, that dynamic continues up to today”.

Mr. Goldwater said he is also unperturbed by much of the negative media attention the Trump Presidency has received, saying, “If you go back to other administrations, to President Obama, the Republicans beat the hell out of Obama, President Clinton too, the Republicans beat him up, that’s politics, and that’s to be expected, the opposition is going to try and make whoever is in power look bad, that’s what Democrats are doing here in the United States along with the liberal media, and I’ve got to say they’re doing a pretty good job of defining who and what Donald Trump is. It’s sad, but it’s nothing more than politics.”

In closing, Mr. Goldwater lent his predictions on the future of the Trump presidency and on Donald Trump’s intentions to run for a second term, “The Democrats’ message so far is all anti-Trump, they don’t have a platform or a message of what they bring to the table, what they’re trying to sell and what they can do for this country. That’s going to hurt their chances.”

“Trump at least has some accomplishments that he can point to, and Republicans can run on those accomplishments. This is his second year, and normally the party in power loses some of their power. The predictions now are that the Democrats are going to make a lot of gains, but it’s still early and my prediction is that the Republicans will hold their positions of the senate and the House of Representatives.”