Things are looking up in Alberta: an exclusive from Premier Rachel Notley 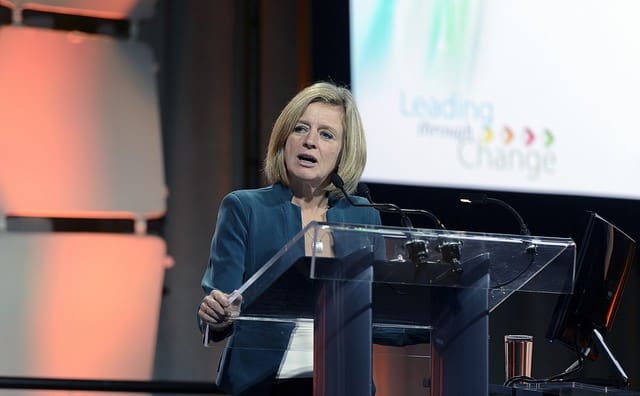 Things are looking up in Alberta. It’s a long road back from the worst recession to hit our province in decades, and there remains much work to do, but all signs point towards a real recovery.

This is no accident. We have worked hard to make sure this recovery is felt throughout the province, from the boardrooms of our businesses to the family rooms of our friends and neighbours.

Alberta had the fastest growing economy in the country last year, and we’re expected to lead the way in growth for the next two years. Manufacturing is up, housing starts are up, retail sales are up, drilling activity is up and exports are up. In fact, almost everything that should be up, is up. Per capita private sector investment rose to more than twice the national average, and average weekly earnings continue to increase despite already being the highest in Canada by far.

Alberta’s economy is recovering – and we’re working to make sure the recovery is built to last. That means we are going to keep creating jobs, keep diversifying our economy and keep the pressure on Ottawa and B.C. to make sure the Trans Mountain Pipeline expansion gets built.

After all, all the trend-lines, statistics and forecasts are great for the Alberta economy, and we’re proud of these accomplishments. But our priority is on the impact they’re having on the lives of everyday Albertans – and jobs are a big part of that.

Today, Alberta has more jobs than at any time in our history – 2.3 million of them. That means this morning, more Albertans got up and went to work than ever before—providing for their families and building their communities. And of that 2.3 million, the number that means the most to me is 70,000. That’s how many new full-time jobs have been created in Alberta since the darkest days of the recession in 2016. These are mostly private sector jobs in large and small businesses across the province that are supporting our growing economy.

This is why so many world-class employers in new and exciting industries are setting up shop in Alberta. Google brought its first international artificial-intelligence research centre to Edmonton, pharmaceutical giant Merck is investing in new jobs at TEC Edmonton, Pinnacle Renewable Energy is building a new biomass plant in Parkland County, Aurora Cannabis is constructing a major production facility, Amazon is setting up a new fulfillment centre just outside of Calgary, and the list goes on and on. They’re choosing Alberta because of the immense advantages we offer. We have the lowest taxes in Canada, and we’re not shy about supporting job creators. Our Petroleum Diversification Program has already attracted $3.5 billion of investment, and initiatives such as the Capital Investment Tax Credit help companies take on new construction projects. This has already saved many investors millions, and new rounds continue to attract even more investment to Alberta.

Those efforts to create a more durable and diversified economy are important, and so too is the need to diversify our export markets, especially for our energy resources. I recently toured Canada to drum up support for much-needed pipeline infrastructure that will help Alberta businesses access new markets and get a better value for our resources. This is a priority for Alberta, for Alberta workers and for workers across our country.

Some governments in Canada feel differently. As you know, the Government of British Columbia has recently taken a run at workers across Canada by trying to block progress on the Trans Mountain pipeline. In so doing, they’re taking a run at the authority of our federal government. It’s wrong and it is unconstitutional—no province has the right to stand in the way of the national interest and the livelihoods of working Canadians. This isn’t a dispute between B.C. and Alberta—it’s a dispute between BC and all of Canada, including many folks in their own province. There is too much at stake for working Canadians, and our shared national economy, to let this stand. The Canadian, Alberta and BC Chambers of Commerce have already stated their support for our position, and I encourage all Canadians to add their voices to the call for swift action.

Alberta’s recovery speaks for itself, but that won’t stop me from sharing this message and fighting for Alberta. Our province represents an incredible business and investment opportunity, and it’s only getting better and better. By creating good jobs, diversifying our economy and keeping our taxes the lowest in the nation, we are making sure the recovery keeps going and that it’s built to last for regular people. The hard work, resilience, and entrepreneurial spirit of Albertans can accomplish anything.