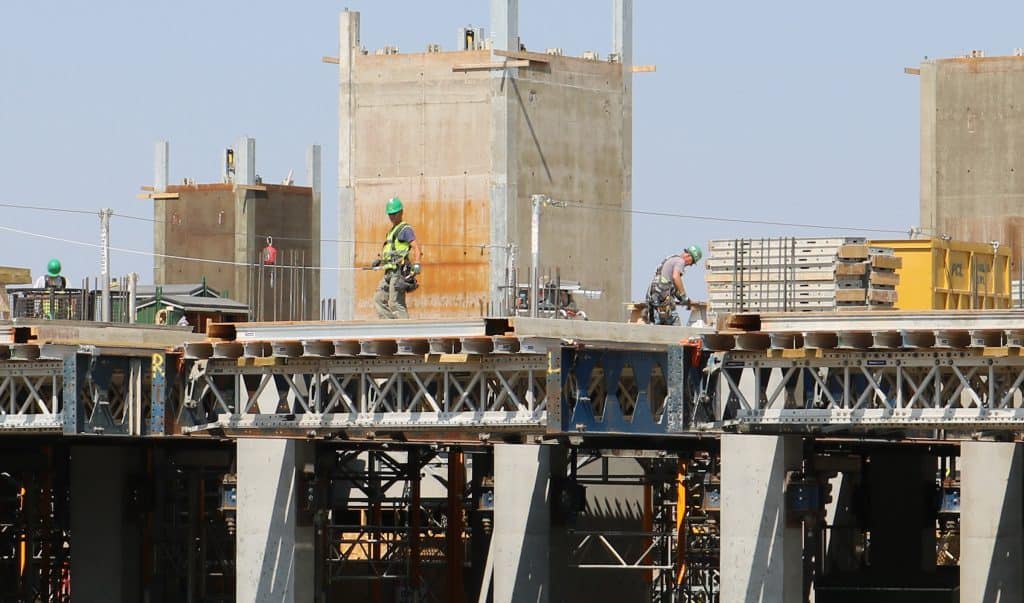 Alberta’s traditional fossil-fuel based economy has been in a period of transition the last several years. Alberta’s provincial government has also introduced far-reaching legislative and policy changes affecting many industries. Together, these create uncertainty in prospects for job growth in the Province.

Alberta’s construction industry provides services to support investment-driven growth for the Province. For the last several years, competitive sources of supply, constraints in shipping capacity, and an evolving regulatory environment have contributed to uncertainty in oil prices and investment. The following slide from the 2018 outlook from BuildForce Canada depicts the significant reduction in new oilsands investment from 2014 forward. The transition is reflected in the declining trend in the value of Alberta Building Permits and construction employment.

Forecasts from the chartered banks suggest that private sector investment in Alberta will remain
subdued for 2018 and 2019, leading to sluggish growth in GDP.

Alberta’s construction industry is also concerned about the impact of recent legislative and policy changes on future growth in construction employment. While the intent of many of these changes is to improve the lives of Alberta workers, the Alberta Construction Association membership is reporting that some of the changes are or will negatively impact employers and workers.

Some of the changes impacting or expected to impact construction include:

Changes to Employment Standards banked overtime and compressed work week averaging provisions. These changes have reduced the amount of hours workers in weather-dependant occupations can potentially work, thus reducing worker incomes. ACA appreciates the opportunity to bring members together with Employment Standards to share information about the intent and impact of these changes, hopefully with the goal to find ways to ensure the Standards can work to the benefit of workers and employers.

The new WCB obligation to reinstate an injured worker, including accommodating a remaining disability to the point of undue hardship, create special challenges for construction’s project-based work. ACA is also concerned about the potential of the change to disadvantage uninjured workers, given the need to accommodate the injured worker first and given the size of the workforce changing with the work available from project to project. Again, ACA appreciates the opportunity to provide input to the WCB as it drafts the policy to effect this legislative change.

Worker disengagement from playing their part in ensuring a safe workplace has in recent years emerged as an issue. ACA is concerned that worker motivation to take responsibility for safety workers may be weakened with the new Mandatory Joint Worksite Health and Safety Committees. The law lacks sufficient detail to properly define the operation of committees where there are multiple employers with overlapping time frames operating on a single site. The new Act introduces new hazards, processes, obligations on parties, and new powers and responsibilities for Occupational Health and Safety officers that potentially extend into labour relations and human rights. There is little evidence of improved safety in other provinces with Joint Committees and ACA fears that employer resources that would otherwise be invested in proven safety practices will be diverted to address administration.

Alberta’s construction industry has a record of resiliency and optimism, proven over decades of an up- and-down resource based economy. The Alberta Construction Association looks forward to working with the Government of Alberta to fine tune regulations to ensure safe and fair workplaces without jeopardizing jobs and investment.

Paul Heyens is Chairman of the Alberta Construction Association.